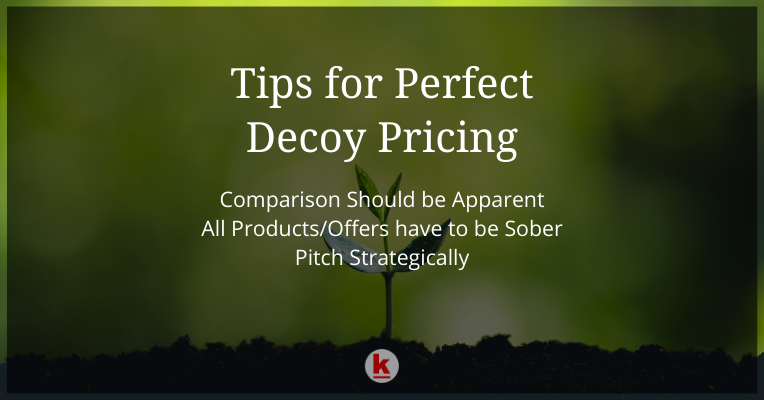 Have you ever been bowled over by the beauty of a design, that you couldn’t stop being awestruck by it?

Have there been times when a design was so-cliché that it failed to catch the slightest bit of your attention?

We all have our kitty of experiences to vouch for both the scenarios. There has to be something in designs or for that matter, in anything that makes us appreciate one and denounce the other. Do you not think there has to be a psychological aspect to it? Of course, when it comes to human beings, emotions play a significant role in choices. Can we then, not say that it is all in the psyche? Think!

So, if something is strong enough to affect your psyche that you feel persuaded to look at it again, you will have an opinion about it. Remember, principles of persuasion and thus psychology, have always played a huge role in decision-making!

Thus, the decoy effect finds relevance in every situation where a person is pushed or persuaded to making a buying decision, even when it is highly-priced, just by placing a decoy against the same.

Here the word decoy actually comes from the decoy effect that shows the people often change their preference between two different choices when they are presented by a third choice that comes to dominate asymmetrically.

We know! Let’s try to simplify this!

A choice which is apparently inferior in all respects to another option, but is only inferior only in some respects and better in others to the third option, is said to be asymmetrically dominating.

The natural tendency of the human mind is to get pulled to the dominating option when the third one, known as a decoy, is placed in the scene.

This is what underlines the design of decoy pricing tables by different businesses that try to convince their buyers to pick the most expensive choice out of the three.

Decoy Effect is best exemplified by our very old subscription for that online magazine. If you are one of those ardent reading enthusiasts and love to subscribe to various online magazines or journals, it is quite possible that you have come across those three columned subscription plans by magazines. It is a typical way they adopt in which they pitch in the lowest price against the Print edition, and a bit higher against the Digital edition, now so far, most likely you will be looking at the Print option, of course. The magazine doesn’t want you to pick the lowest, so now it places the decoy, the third option where it offers both the Print and Digital Edition at a slightly higher price. There goes the trick and you end up picking the last one, even though it was pricier.

Marketing these days may have gone high-tech but it definitely has not lost touch with the basics. When you actually design pricing tables, the correct pitching of offers still matters.

Here are a few pointers that may be handy when you chart yours next time:

This is what we meant, the art of persuasion! You are targeting the human mind that runs on emotion. That is what you have to remember. Always. Designs that are able to strike the human psyche are often the ones that hit on the emotional triggers.

Remember, if you are able to master the Decoy effect in marketing, a lot on your marketing desk will be handled.

Publish your blog with us to increase your exposure to a relevant audience. Take a look at our guest posting terms.

Publish your blog on this space.

RedAlkemi publishes a collection of blogs submitted by guest bloggers in the space of digital marketing, graphic design and web development. If you think you can add value to our blog with your content, we'd love to have you on board! Email us at